The Mimosa hostilis inner root bark comes from a tree locally known as Jurema, Jurema Preta, Black Jurema or Vinho de Jurema and is the most desired part of the plant known by the local Shaman for its entheogenic properties mimosa tenuiflora.

The Mimosa hostilis inner root bark comes from a tree locally known as Jurema, Jurema Preta, Black Jurema or Vinho de Jurema and is the most desired part of the plant known by the local Shaman for its entheogenic properties mimosa tenuiflora.

Mimosa originates from Brazil, where it has also been used for centuries for various medicinal purposes. The inner part of the root contains the most of the active alkaloids, this is also the part of the Mimosa plant that we offer here at Avalon Magic Plants. In the western world, Mimosa is often used in an Ayahuasca brew, as a substitute for other DMT-containing plants such as Psychotria Viridis or Chaliponga.

The primary active ingredient in this part of the plant is N, N-DMT and there is also a small amount of β-carbolines. Some sources also mention 5-MeO-DMT. Although the term Mimosa Hostilis is still used often, the newer scientific term mimosa tenuiflora is also used to describe this root bark. We use the two names for the exact identical products.

Mimosa Hostilis (or mimosa tenuiflora) is often combined with MAO-inhibiting herbs such as Banisteriopsis Caapi to prepare the psychedelic Amazonian-brew ayahuasca. When combined with Peganum Harmala the brew is called anahuaca, an ayahuasca analogue with psychedelic traits that in terms of effects strongly resembles ayahuasca. The drug is very popular among psychonauts, and we report fairly intense trips with its use.

We sometimes compare the effects of an ayahuasca trip with a high dose of psilocybin mushrooms, where a drastic change is noted in the world around them. Even though some visual effects might be similar, users often report that ayahuasca is much more intense and hallucinations are more vivid. We have used the brew for centuries for spiritual, but also as a therapeutic means to combat a wide range of mental problems.

The Jurema Preta that we offer is imported directly from Brazil and new loads arrive every month, so you can be sure that the product is of high quality and always fresh.

Another completely unrelated use for this plant comes from Mexico, where the bark of the tree is known under the name Tepezcohuite.

The Herb here is strictly offered as botanical specimen. Not for consumption. Consult the disclaimer before your order

The tree is an important source of forage for bees, especially during the dry season and in the beginning of the wet season.

Like most plants in the family Fabaceae, Mimosa tenuiflora fertilizes the soil via nitrogen-fixing bacteria. The tree is useful in fighting soil erosion and for reforestation. 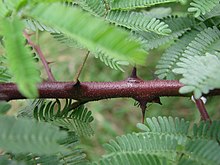 Mimosa tenuiflora is an excellent source of fuelwood and works very well for making posts, most likely because of its high tannin content (16%), which protects it from rot. Because of its high tannin content, the bark of the tree is widely used as a natural dye and in leather production. It is used to make bridges, buildings, fences, furniture and wheels. It is an excellent source of charcoal, and they have done at least one study to see why this is the case.

The healing properties of the tree make it useful in treating domestic animals. They can also use a solution of the leaves or bark for washing animals in the prevention of parasites. Because the tree keeps most of its leaves during the dry season, it is an important source of shade for animals and plants during that time.

There are no reviews yet.

Only logged in customers who have purchased this product may leave a review.